Lin (Linda) Anderson (born in Greenock, Scotland) is a Tartan Noir crime novelist and screenwriter, best known as the creator of forensic scientist Rhona MacLeod. The Rhona MacLeod books are currently being developed for ITV.

Lin is a member of the Femmes Fatales crime writing trio, together with Alanna Knight and Alex Gray and she is also one of the founder members of Bloody Scotland, a Tartan Noir and Scottish crime writer’s festival, which is held in Stirling since 2012. 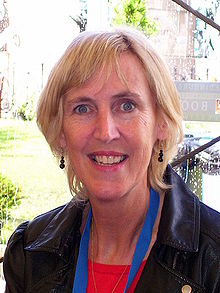 Mark Philip David Billingham (born 2 July 1961) is an English novelist whose series of “Tom Thorne” crime novels are best-sellers in that particular genre. He is also a television screenwriter and has become a familiar face as an actor and comic.

In 2001, Billingham’s first crime novel, Sleepyhead, was published in the UK by Little, Brown and Company. He is a self-confessed fan of crime fiction, as well as a really serious collector and has alleged that the expense of collecting books inspired him to get into interviewing and reviewing books, partly for the complimentary copies. Starting with a local newspaper, he progressed to providing reviews and interviews for SHOTS, and then to magazines, including Time Out, where he found himself interviewing people such as Michael Connelly, talking and learning from other writers.

Alex Gray, born 27 May 1950, Glasgow, is a Scottish crime writer. She has published 9 novels, all set around Glasgow and featuring the character of Detective Chief Inspector Lorimer and his psychological profiler Solomon Brightman, the earlier novels being published by Canongate and later books by Little Brown.

Alex is also member of the Femmes Fatales crime writing trio, together with Alanna Knight and Lin Anderson and she is also one of the founder members of Bloody Scotland, a Tartan Noir and Scottish crime writer’s festival, which is held in Stirling since 2012.

Q. If you could choose any out of publication novels that were part of a series to republished and make available for digital release, what would you choose.

Q. If you could add any book to the list for Crime Book of the Year who would you choose

Q. If you could meet and interview any Crime writers alive or dead who would you choose

Q. If you could collaborate with any author on a book and have any two characters from your books work together who would you choose

Q. If you could choose any actor to play your lead character in a television adaptation of your books who would you choose

LIN – STV Have Their Own Idea, Lin Was Not Sure Who She Wanted As Long As The Actress Was Not A Wee Slip Of A Girl
MARK – Tom Thorne – David Morrissey
ALEX – Detective Superintendent Lorimer – Clive Owens